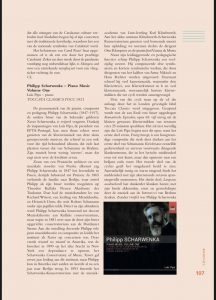 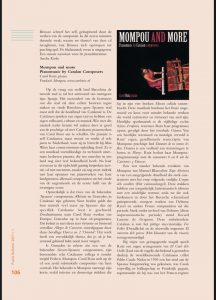 If asked, most people would say Barcelona is Spain’s second city. Most Barcelona  residents would argue it is not a Spanish city, but the Capital of Catalonia. In recent years it has become obvious that the Generalitat de Catalunya wants to secede from Spain.

This is still the ambition of the Catalans, last February’s elections gave evidence of this, with the separatists securing a majority. Such a division would be economically unfavourable for Spain and European unity. Whether Catalonia can thrive without Madrid’s governance is a question, that does not need to be answered in this piano magazine.

Catalonia differs from Spain in many ways. The Catalans speak their own language and have their own national character, culture and music. Anyone who wishes to become  acquainted with their music are advised to purchase the beautiful CD of Catalan piano works by Carol Ruiz.

The pianist herself is Catalan, albeit has lived and worked in the Netherlands for many years where she studied at the conservatory in Utrecht with Alan Weiss. She is a musically warm-blooded and both technically  exceptionally gifted pianist, who is regrettably not yet widely known in our country.

After her (first) CD “Nocturnes”, which was also favourably reviewed by this magazine, she makes an even greater impression with her recordings of piano works by her compatriots, all composers from the end of the nineteenth and the first half of the twentieth century.It is remarkable that two of the most famous “Spanish” composers, Albéniz and Granados, were born in Catalonia. Their music though, is much more Spanish rather than specifically Catalan.Nonetheless, Carol Ruiz recorded works by Enrique Granados in her CD program. She ends with Allegro de Concierto, that is preceded by Granados’ very virtuoso and vibrantly interpreted graceful Danza no. 2 “Oriental”. That work has a delightful theme that, once you’ve heard it, you’ll never forget.Granados is, in a sense, one of the most famous Great Spanish composers. His most famous truly Catalan colleague is without a doubt Federic Mompou. Carol Ruiz has presented six substantial compositions by him.Mompou is best known because of his short, often intimate and dreamy pieces that he brought together in his four books Musica callada. Ruiz leaves these musical treats undisturbed as she opted for his lesser known most extroverted and virtuoso works.

Ruiz opens her program with delightful playing music: the five-part cycle Scenes d’enfants. It is followed by the diptych Gitanes. Filled with a delightful melancholy and nostalgia, is Ruiz’s own, refined transcription of Mompou’s beautiful song Damunt de tu nomes les flors. After that, a multitude of moods can be heard in Planys. Ruiz ends her Mompou program with the numbers 6 and 8 from the Canciones y Danzas. lesser known counterpart of Mompou was Manuel Blancafort. His Absència is of a poignant sadness that contrasts sharply with the following, cheerful L’orgue dels cavallets (the carousel organ).These pieces have an accessible, late-Romantic idiom with a southern warmth, which we can instantly relate to in earlier works inspired by the Iberian Peninsula by Debussy, Ravel and other French composers of the period.Strongly influenced by Debussy (during his Impressionist period) stood Ricard Lamote de Grignon. This lesser-known Catalan is represented in this album with the spicy staccato piece Foc Follet (wandering light) and the atmospheric impression El convento dels peixos (the monastery of the fish).As an encore in style, Ruiz plays her own arrangement of El Cant dels Ocells (Song of the birds), which has become well known thanks to the world famous Catalan cellist Pablo Casals. At the end of the Spanish Civil War, Casals voluntarily exciled himself to France, opponent as he was of the Franco regime that had forbidden all manifests of Catalan culture. Since then he started all his concerts with this traditional Christmas song, making it one of the national symbols of Catalonia.

Listening to Ruiz’ beautifully recorded CD is like a journey through the beautiful Catalonia. Especially now that this region still seems inaccessible for the time being due to the pandemic, “Mompou and more” is an excellent substitute for a plane ticket to the sun.

Live presentation from “Mompou and More” at the Classical Radio (Radio 4) in The Netherlands! Use the link bellow to listen and watch the interviews and live concert.

Artist of the month chosen by Artenzza Magazine! 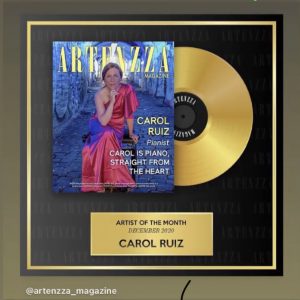 My Cd is played at Radio 4!

Mompou and More is gedraaid in radio 4!

Mompou and More is on Spotify!

This website uses cookies to improve your experience while you navigate through the website. Out of these cookies, the cookies that are categorized as necessary are stored on your browser as they are essential for the working of basic functionalities of the website. We also use third-party cookies that help us analyze and understand how you use this website. These cookies will be stored in your browser only with your consent. You also have the option to opt-out of these cookies. But opting out of some of these cookies may have an effect on your browsing experience.
Necessary Altijd ingeschakeld
Necessary cookies are absolutely essential for the website to function properly. This category only includes cookies that ensures basic functionalities and security features of the website. These cookies do not store any personal information.
Non-necessary
Any cookies that may not be particularly necessary for the website to function and is used specifically to collect user personal data via analytics, ads, other embedded contents are termed as non-necessary cookies. It is mandatory to procure user consent prior to running these cookies on your website.
OPSLAAN & ACCEPTEREN
Ga naar mobiele versie